This PcW, the 10 (along with the PcW 9512+ and PcW 9256) never made it to the Dutch market, because the venture with Schneider had broken up and Amstrad was not yet properly represented in Holland. The 10, however, is the most appealing model (to me). Had it been on sale in 1986 for the price of an 8256 or an 8512 it would have been the height of the season! But then again, the increased compatibility of this model could have reduced it to 'one in a row': I cannot remember the number of PC's which came and went later (a least a Commodore PC1, an Atari AT 4, a 386 clone, later upgraded to a 486, and etc. etc.) but the Joyce always remained.

Anyway: I can recommend the purchase of one of these models directly from the UK. They offer a lot of fun for a bargain price: for about NLG 150 apc. Transportation takes up a lot of that amount, so if you can make alternative arrangements it would be about half that price! At least this one is definitely worth it (certainly if you have LocoScript 3 or 4 for it). 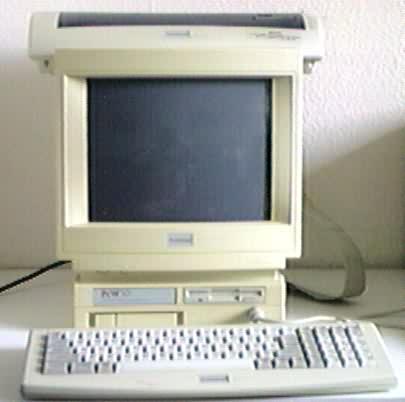 The PcW 10, sixth and last "true PCW" in the family, in that respect that it uses CP/M, has the nickname JOYCE and resembles the 8000 series in terms of hard- and software. It was put on the market in August 1993 and is a look-alike from its predecessor PcW 9256 (see elsewhere on these pages), with the same keyboard and 9-pin dot matrix printer. The same handy printer platform on the top of the monitor and still a one printer cable design (power is provided by the flat cable). It is said to have been modified slightly due to (non-) availability of the components: I have not opened it yet, so I will get back on that.

The small letter 'c' in PcW indicates that this model boots by means of a 3.5" disc drive with an EMF, rather than an Early Morning Start EMS file. All PcW's use 3.5" drives and the new file extension: boot files cannot be exchanged between the various models. This applies to both CP/M as well as LocoScript boot disks.

It came with 512kb and a 3.5" disc drive: good old LocoScript was provided (literally: it was a version 1) by Amstrad but newer versions were released by LocoMotive quite soon. In fact it was not incorporated with the 10 because of LocoMotive's price. Rumour has it that LocoMotive accepted a lump sum for LocoScript 1, upon introduction of the 8256, instead of a part of the 8256 takings. A mistake they were obviously not intending to make a second time. 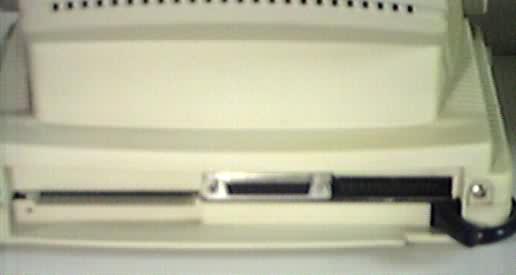 The standard 8000 series expansion port is present again (left) as well as a standard Centronics printer port (middle). Not much to say about the port: it is a female IBM connector and does not require the non-standard cable that the earlier add-ons for the 8000 series require. Cheap and easily available: a novice combination for Amstrad, you might say… The bad news about the expansion connector on the other hand can be seen in the photograph. It's low fitting does not allow for attaching the standard boxes that were produced for the 8256 and 8512. The horizontal placement of the computers main board does not allow for another angle but the at least the similarly located PCW 9512 main board is mounted at a higher distance from the desktop. This port was designed to work through an extension cord and that would also prevent the "Christmas tree" as sometimes found on the 8000 models. That would disturb the elegant look of the machine anyway. A 'dongle' was marketed by Silicon City and an integrated platform and converter called TransMet by Creative Technology. The third port on the right (hardly distinguishable due to the quality of the photo) is the PCW printer port. 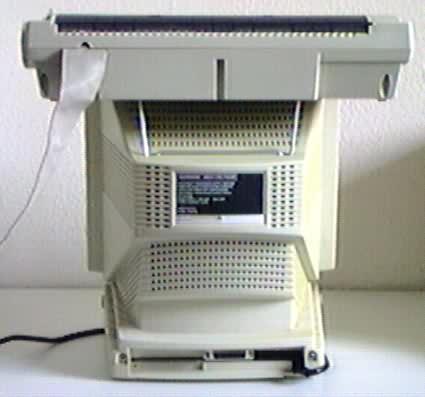 It does possess the most features plus capacities of the PCW's and is the most compatible (to both PCW's as well as PC's). Its 3.5" drive allows it to exchange data with PC's relatively easy while still reading and writing CF2DD.

Plus: it is supposed to be able to use older PCW add-ons through the edge expansion connector as well, provided for the remarks on the available space, as made earlier. I have not tested this (yet).

When used with LocoScript 2 (my favourite) I think this model could be the best of them all.

In short: it should have been THE Joyce for the die-hard but to my knowledge it was marketed in England only and was therefore not that wide spread as the ones produced during the joint-venture with Schneider. On top of that Amstrad was not widely represented on the Continent and at that time there was no Amstrad sales office in e.g. The Netherlands. 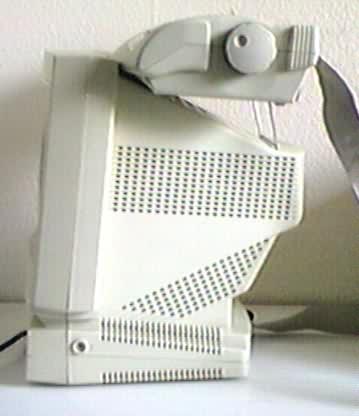 The printer is the same model as used on the PcW 9256 and 8000 series but cannot be exchanged.

The only other distinguishing outer features are the label on the back and the connector. Keyboards may be exchanged throughout the entire range of Joyce's. I will present a couple of pictures on the printer and keyboard in the section on the PcW 9256.

Moreover: it still uses a Z80 version as processor but runs at quadruple speed (16 MHz instead of 4), much like the Speeder kits (8 MHz) available for the earlier PCW's and it uses a 1,44mb HD drive, with a DOS compatible disc format. Besides the obvious changes in hard-and software (making it incompatible with a "Joyce"), 'Anne' suffers from a great deal of technical flaws and not much software was written for it. 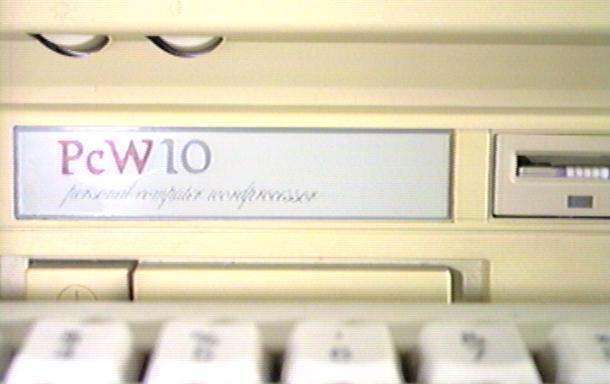 The model label of the machine with the two screen controls just above it. 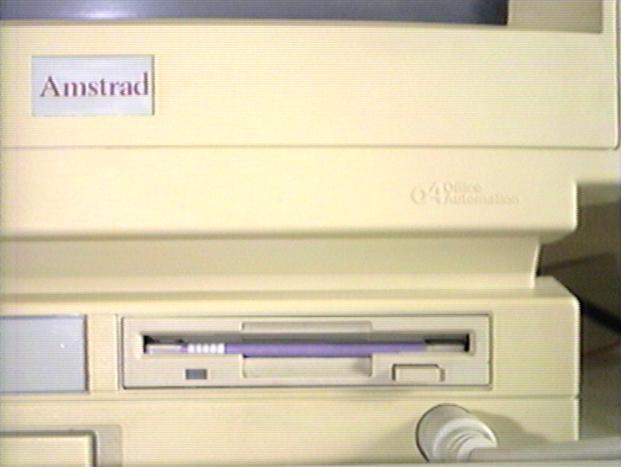 The Amstrad brand label plus a good view on the 3.5" disc drive with a disc inserted.

Note the dimly visible text "oA Office Automation" (on the right of the monitor edge between the 3.5" drive and the Amstrad label) that both this model as well as the PcW 9256 bear. The purpose of this special label is unclear to me.

Also visible is the keyboard plug, a location that is not very convenient (you should therefore allow for some distance between the keyboard and the computer: see the explanation and the accompanying picture below). The spot where it plugs in on an 8000 model is much better. 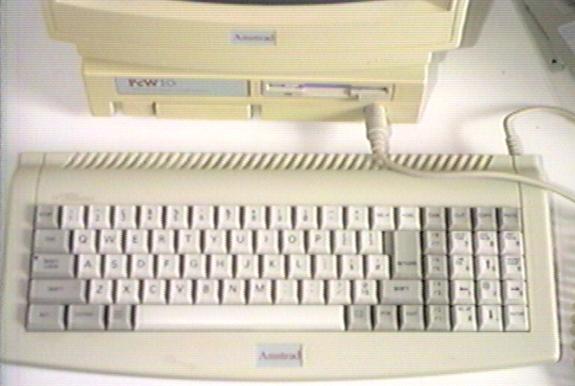 The keyboard is definitely of the 8000 style, with a new cover. The photograph clearly demonstrates my objection to the location of the keyboard plug: ejecting the 3.5" disc can get your finger stuck between the keyboard and the ejected 3.5".

On the other hand, I welcome the return of the 8000 style: it was the main reason why I never got "the feeling" for the PCW 9512 (the same applies to the PcW9512+). Although e.g. the Teqniche AT keyboard for the PCW is superior to any keyboard, I had the same problem with that: over the years I practically fused with the 8000 layout and size. It is hard to get rid of old habits. The other 'old hand' is the 9-pin dot matrix printer; also an 8000 model, but I will deal with that one in the section on the PcW 9256. However, I did replace that quite soon by a HP Laserjet printer (funny how birds of a kind flock together: at a certain time there were no less than five Dutch users with Laserjets in the JCC).