This listing presents you with some of the add-ons available for the PCW series. Both true add-ons that can be connected to the expansion connector on (the back of) the PCW's as well as other useful devices. I will be adding pictures of PCW add-ons from time to time. 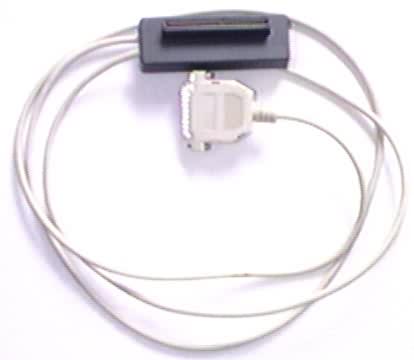 LocoLink cable: a parallel cable that connects to the expansion port of the PCW and the LPT printer port of the PC. By means of the software supplied, the PCW is turned into a 'slave' of the PC. It becomes drive Z: on the PC and files can be copied directly from the PCW to the PC. File conversion, however, is still required.

Members of the Joyce Computer Club can borrow this cable if postal processing is difficult (e.g. too many discs) or if plain ASCII format is required. File conversion can take place through the Internet, 5.25", 3.5" discs, CD Recordable, QIC80 or TR1 tapes. 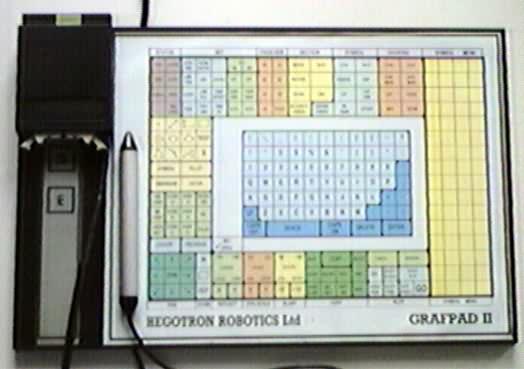 Grafpad II. Graphics tablet, allowing (pen) program control for the PCW (tricky business, though: never got used to it).

Moreover, it can be used for drawing graphics: a more useful purpose.

Note that the expansion connector is not of standard box type: It does not provide for a very stable connection and has to be treated with respect… 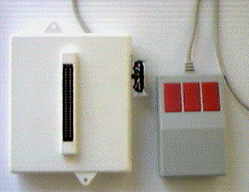 AMX mouse. One of the few (next to the Kempston two button mouse) mice produced for the PCW. Supported by, among others, the MicroDesign DTP package. It has been rumoured that a LocoScript mouse-driven version was written for this mouse, but I never saw it…

The interface has a break through connector, allowing for a second expansion port. 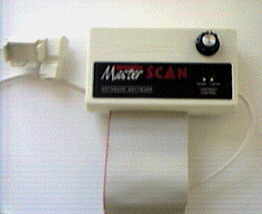 MasterScan: scanhead that fits over the print head of the PCW (8000 series only) printer and connects to the expansion port of the PCW. The scan head itself is shown on the left.

By feeding the printer hardcopies and activating the software, electronic copies can be made of the paper in the printer. The knob allows for brightness control. Software is a bit limited though, virtually restricting the size of the scan to screen format of the PCW. Moreover, the box does not allow for another expansion port. 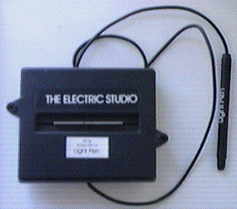 Electric light studio light pen. Simple version of the Grafpad (as shown earlier), without the graphics tablet, for drawing graphics. Supported by some DTP packages (one of them being Newsdesk International). Interface has a break through connector, allowing for a second expansion port. 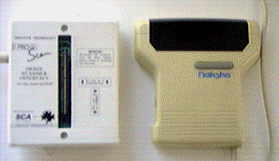 MicroDesign ProScan. Handscanner for use with, among others, the famous MicroDesign II and III DTP packages. Allowing for up to 400 DPI resolution. The best produced for the PCW, supporting several graphic file formats: in the highest resolution only matched for quality by the MicroDesign DTP software. The interface has a break through connector, allowing for a second expansion port. 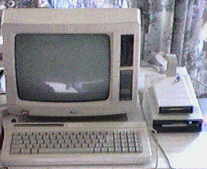 A true monster of a PCW: not only has this 8256 been fitted with both external 3.5" and 5.25" disc drives, it also has a Sprinter card internally fitted, providing for 8 MHz speed (instead of the usual 4 MHz) and an additional 512 kb memory. The additional memory can be used in the RAM disc by programs like LocoScript 4 (storing scalable fonts), Scratchpad II (larger spreadsheets), Flipper (multitasking several environments on a PCW) and MicroDesign (allowing the use of more fonts and operating large paper sizes in high resolution). Copying CF2DD disks is faster too as disk changing is no longer required. The Sprinter card is known to be sensitive to the influence of temperature, though, and can sometimes malfunction. Versions of up to two megabytes additional memory can be found. The JCC fitted these cards a couple of years ago: mounting this card requires the original Z80 processor and one memory chip to be replaced by the connectors of the Sprinter card. An external version is also around, but I never encountered (or fitted) one of these. The disc drives can be selected on line by means of a switch (just visible on the back of the 3.5"). Copying 5.25" on 3.5", and vice versa, can be a bit of a problem, due to the different aligning of the drive heads. 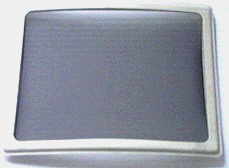 Anti-glare screen for the 8000 series: a useful add-on, considering the green monitor of the PCW that is very sensitive to sunlight… Users of such a screen should be aware of the risk of the brightness control of the PCW, though. They could be tempted to turn on the brightness for a better contrast on the darker screen. However, this control has been turned up way too high in the factory (or the design) already: I consider the lowest setting of the control the maximum! Turning on the control too high may result in a burned-in screen. You can easily recognise such a screen: after it has been switched off it will continue to glow and display the last (or most burned-in) screen.

The margin maker: one of the few things missing on the PCW is a paper feeder (single sheet, that is) on the printer. It does have a simple ruler, but this hardly provides for the possibility of accurately feeding multiple sheets in the printer. This simple device does not provide for multiple (automatic) paper feeding but does it's job fine: by means of the adjustable vertical ribs (manual) paper feeding can be done effectively without moving the next sheet. 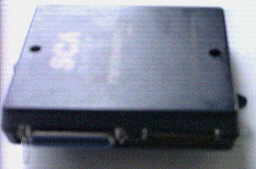 Centronics RS232 interface: a very useful add-on, offering a standard parallel and serial interface. The first is most commonly used for connecting standard printers, the second for (null-) modem communication and faxing. This particular model, the Professional from SCA Systems, has an additional battery backed up clock built-in and extra software for operating it. Besides this clock, it is a standard old type interface, closely resembling the standard Amstrad/Schneider interface. There is no break-through port for a second add-on fitted. It has a standard RS232 serial connector (large type) but the Centronics connector is of female Centronics type. As printers normally have a female Centronics connector too and PC's an IBM male connector, the standard cable nowadays provided with printers has a male Centronics and a female IBM connector. The Centronics male/Centronics male cable required for this interface is not very rare, but computer shops tend to overcharge grossly for such a cable. A newer type of interface is the Cirtech interface, which offers a standard IBM male connector but only has a Centronics interface: no RS232. This cheaper interface meets the demands of the normal user perfectly: a serial interface would normally be needed for modem and fax communication only. The Cirtech also comes with additional memory: I believe of up to 2 megabytes. Another, even more advanced, interface is the one produced by Margolis: it is the only interface that exceeds the maximum serial speed of 9.600 baud rate. It also comes with fax software.

Intergem drive-interface from Dynamic Data Technology (a Welsh company), designed by Ray Alker. An interface that fits in the, empty, drive bay of an 8256 (the original covering plate should be removed). It offers a connector for a 5.25" Shugart compatible 80 tracks disc drive but has a rather unusual power connector, suitable for 5.25" drives as mounted on Acorn BBC computers (I do not recommend to use the PCW power supply for such a purpose, though: it is not powerful enough). I was told that the reason for this was because a BBC was the only other computer the company had access to. The ic's and chips on the card itself are a mystery: as you may have seen, connecting a Shugart compatible drive is simply a matter of the right connector. The obvious features are two connectors for the PCW power supply and the data cable of drive B. 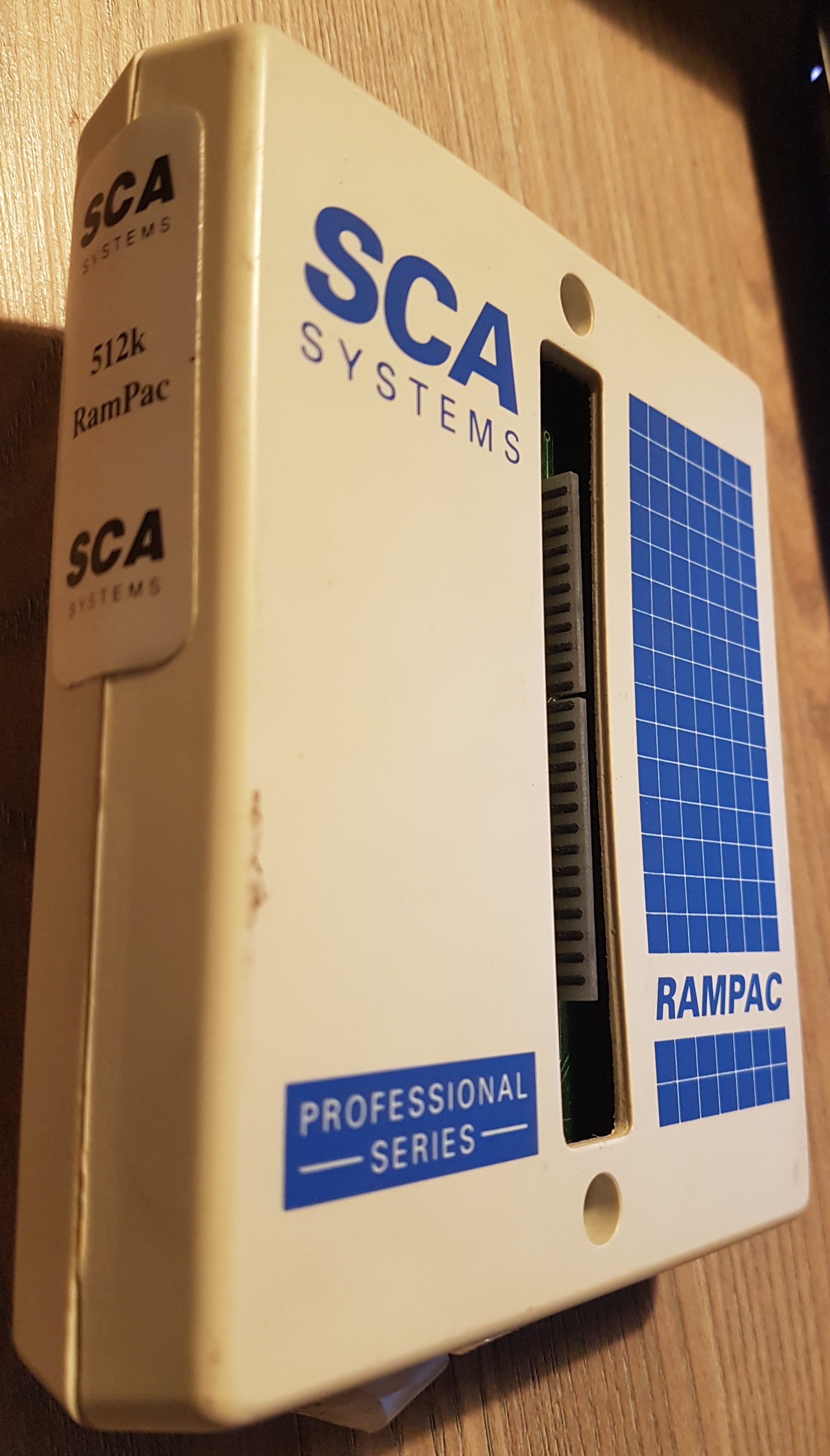 SCA Rampac. A rare one in the Netherlands: additional memory, through the JCC, was normally fitted on the main board using Sprinter 8mHz cards with additional memory on-board. The SCA version allows for easy fitting without modifications on the PCW but does not increase the clock speed of the computer. Useful for huge programs like MicroDesign, LocoScript 3/4, Flipper, The Network, Rocket, Scratchpad+ and the like. The interface has a break through connector, allowing for a second expansion port.

Teqniche 102 keys AT enhanced keyboard for the Amstrad PCW series. Keyboard with the standard 102 key AT layout. Altered for use with the Amstrad PCW: all the keys of a standard PCW (like [PTR], [EXIT], [+],[-], [COPY], [PASTE] etcetera) are present plus additional numeric path and arithmetic keys. No more [SHIFT][F1] to strike [F2]: all common keys are available. Heavy-duty model with a nice touch and click built-in. 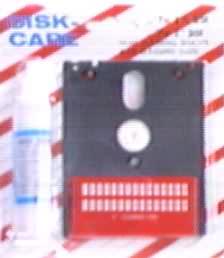 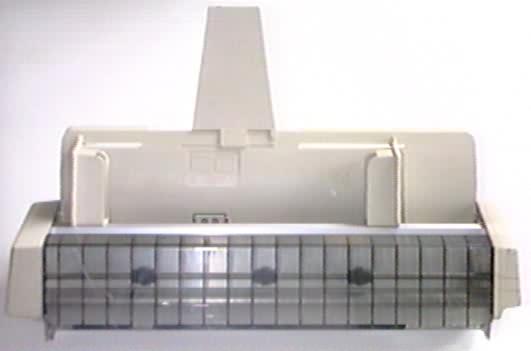 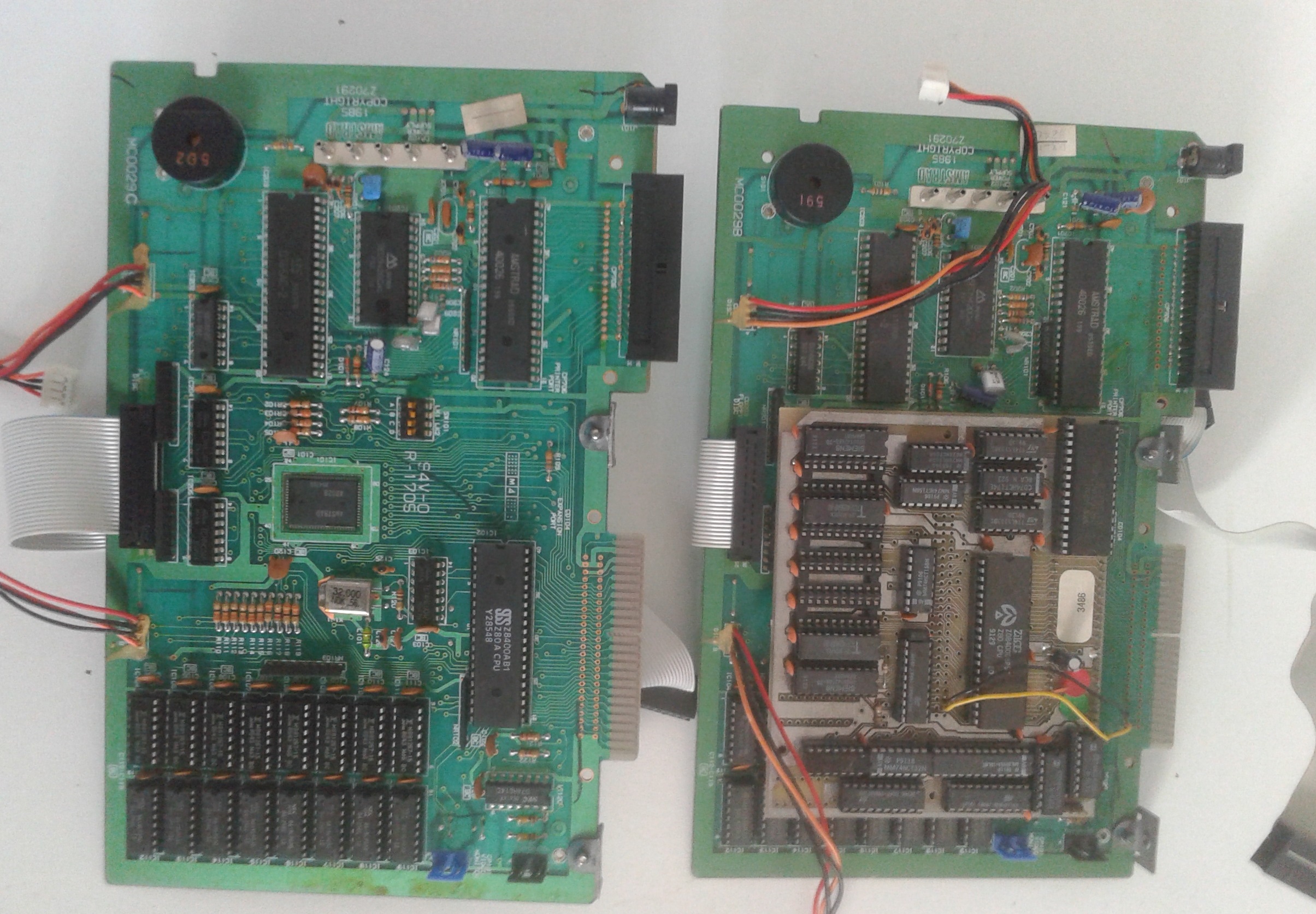 Sprinter: a replacement Z80 processor running at 8 instead of the 4 mHz of the original Z80A processor. The PCB card also contains additional memory, in this case 256 kilobytes, yet I also have a 1,5 megabyte version.

Mounting it requires soldering 2 wires on the motherboard and you also need to replace ('pull') the Z80 processor, which is a bit awkward as it has a whole lot of pins... Probably the reason why this card never gained massive popularity in the PCW community, when compared to the add-on boxes with additional memory. The extra speed of the replacement Z80, however, cannot be achieved using the expansion port.