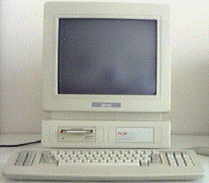 The PCW 9512, the third PCW model, shown up front. Standard equipped with a 706 kb 3" drive, 512 kb RAM, LocoScript version 2 and a daisy wheel printer. The PCW 9512 still has an integrated mother board and power supply, though a 'casing' is visible below (integrated with) the monitor. Both keyboard (XT-type with 82 keys) and 14" monitor (rumoured to be from the PC 1512 and PC 1640 series) are more standard than the 8000 components. 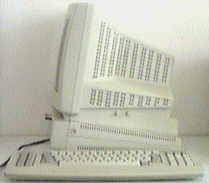 The keyboard plugs in on the right lower side of the monitor (invisible, because blocked by the keyboard). Not the best location and a (very) tight fit! The keyboard itself, however, is much better than the 8000 series keyboard but takes some getting used to (for users that are used to the 8256/8512 keyboard)!

This side of the monitor shows the two screen controls available: brightness and contrast. It also clearly shows the angle that the computer seems to make as well as the compact size of the plastic casing. Besides the monitor the casing also contains the main board, power supply and one double sided 3" disc drive, as well as space to mount a second disc drive (behind the panel as shown on the right lower front side of the picture of the PCW above, with the red 'PCW' printing on it). 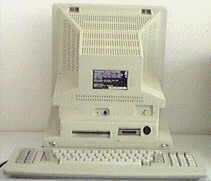 The backside of the PCW 9512 shows the available communication ports, from left to the right: PCW expansion port (horizontal edge connector), Centronics parallel port (horizontal, industry standard connector) and PCW printer port (round connector). I do not much care for the location of the power on/off button (above the black PCW printer port) on the backside of the computer, but it still beats identical location on PC's with iron casings. I am always afraid that such on/off buttons or switches could (in event of short-circuiting) electrocute one...

The case is secured by six screws (4 on the back, 2 on the sides), but, before disassembling it, both knobs of the screen controls (on the side) must by removed, before the case can actually be removed. 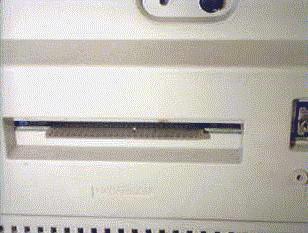 The PCW expansion port in close-up. This edge connector is, fortunately, compatible with the earlier PCW 8256 and PCW 8512: all earlier add-ons can still be used with the newer machine. Less fortunately is that the port has been mounted horizontally, rather than vertically (as in the 8000 series): bulky add-ons may therefore fit less easily.

Also, when bootable software on CF2 discs (for the 8000 series) accompanies the add-on, an upgrade for the software is required. The single disc drive of the PCW 9512 is of the CF2DD type: it cannot boot from 8000 EMS discs (it can read them: a utility 8000COPY, that allows you to copy from CF2 disks, comes with the 9512). Usually you can copy the required files to a boot disk suitable for the PCW 9512 and that should work. 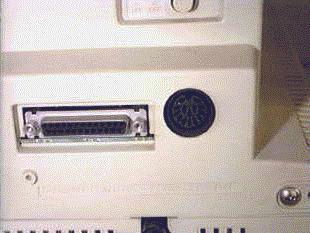 The major improvement of the PCW 9512 is an industry standard connector. The Centronics parallel connector (shown left) allows you to hook up standard printers, though you will require new printer drivers for LocoScript and/or CP/M +.

Also shown is the round connector for the PCW's own daisy wheel printer. The version of LocoScript 2 which came with the 9512 forces you to have this daisy wheel printer plugged in, in order to be able to use the Centronics port with another printer. Later versions of LocoScript for this machine do not have this flaw. A definite improvement of the printer connection is the integration of the data and power cable, reducing the number of cables (even more)! The same feature can be found on later PcW's, where it is less handy (makes the matrix printers incompatible with previous models). 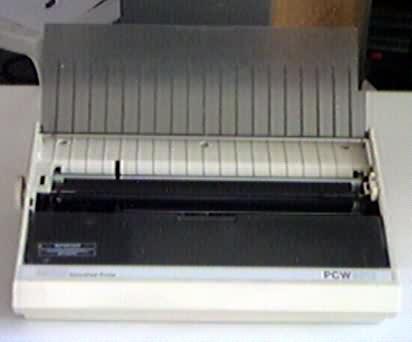 The PCW 9512, like its predecessors, also came with a dedicated non-standard printer. But, instead of a matrix printer (as used with the 8000 series) a large daisy wheel printer was supplied. With this printer Amstrad once again confirmed the need of PCW users for high quality hardcopies.

The printer is big enough to handle a single sheet A4 sheet in landscape mode: a formidable tool for producing superb text, although it is not very fast and is not much good for graphics. The addition of a standard parallel printer port reconciles Desktop Publisher and other graphics users. 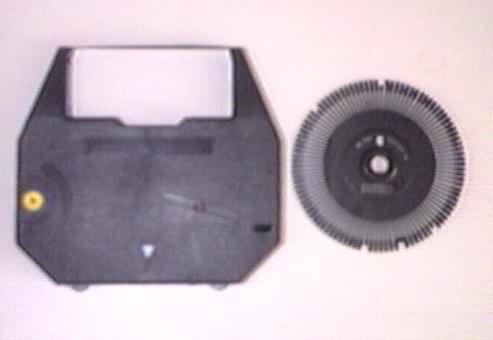 The ribbon type used, an Olympia Carrera II, is a standard model and can be obtained in both nylon and the more expensive carbon versions, both providing excellent quality.

The daisy wheel (shown is the Courier 10 GB) is also a fairly standard model and lots of version can be obtained in many languages, fonts and sizes. Fortunately LocoScript 2 can be tailored to different daisy wheels around, using the LocoChar software. 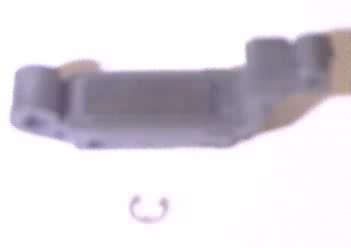 A weak point in daisy wheel printers is the hammer. After a long life of hard use, the vulnerable hammer will break into two pieces. This picture shows the magnet in the middle that is activated by the two electro magnets on the armature (shown further below).

It is on the edge of the magnet, where the plastic is the thinnest, where it will break. This kind of damage is beyond repair: glue (even strong one) will not do.

Fortunately, spare parts are available and replacement is not very hard (note the tiny ring shown in the first photograph which is used to fix the hammer to the armature). The hammer shown in its place (do compare with the pictures below where the hammer is removed). The two things to note are: 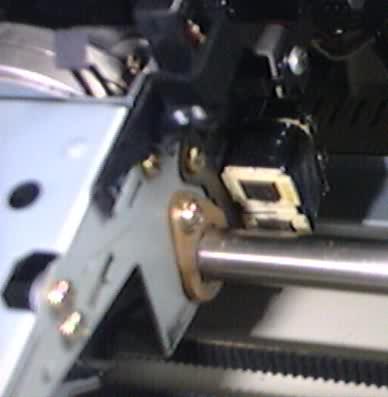 The hammer has been removed in this picture and the two magnets are exposed (the second lower one is partly hidden behind the metal bar of the printer). 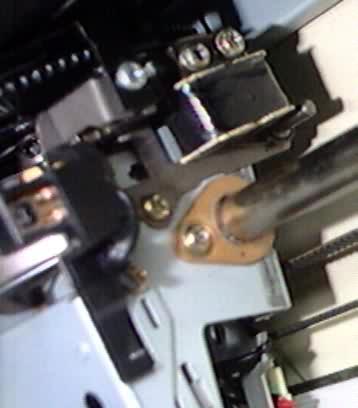 The same object, different angle: again, note the location and obvious function of the magnets.

In respect of durability the PCW 9512 closely resembles the PCW 8256 and 8512: in fact the disc-drive and printer are the only parts that will break down after a long life. With the daisy wheel printer, the keyboard and the screen supplied (all of them better than the 8000 equivalents) plus the standard printer port, I consider the 9512 a worthy successor to the 8000 series.