One of the last additions to the collection of the Joyce Computer Club is the PcW 9256. These additions comprise the PcW 9256, PcW 9512+ and PcW 10, which never made it to the Dutch market. Probably because the venture with Schneider had broken up and Amstrad was not yet properly represented in Holland. I am still in the process of investigating these models and the information is still incomplete and may vary for some time to come… 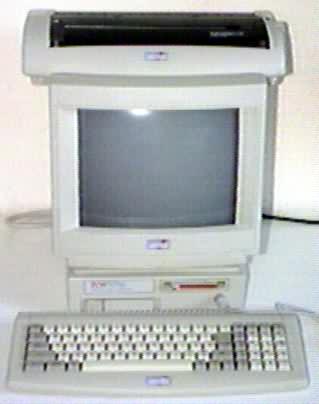 The PcW 9256, was introduced in 1991, together with the PcW 9512+, and its housing was a complete redesign, resembling none of the earlier PCW's. It is a quite elegant design, with a printer platform on the monitor: perfect for small sized desktops. The keyboard is an 8000-style one, only the case has been modernised and curves and roundings have been added to match the printer in a more modern fashion. The monitor has rather large "margins" to the left and the right so that, while working with it, it may look like that the monitor is not placed at the proper angle, but I checked it thoroughly and it is located properly.

Besides that, the LocoScript 3 that came with it, displays in inverse colour. Takes some getting used to as well, but the screen is actually of good quality: you just have to sit in front of the monitor: looking at it from a (sideways) angle will deform your interception of the screen display. I am not sure whether this is a standard or patched LocoScript version and doubt if it is good for the monitor (there is an increased risk of an burned-in screen, but so far it has survived nine years without any signs of it).

It comes with a meagre 256 kilobytes memory: by no means sufficient for running LocoScript versions 3 or 4, MicroDesign or any other big program. I will therefore look into the upgrading possibilities soon. For those who consider it to be a shame to modify anything in its original configuration: this PcW will not serve for museum purposes, though it will be on display on club meetings I guess J, but will be a working machine, just like the others. This one is just too neat to waste that way. And frankly, with 256kb, copying the system disks for backup purposes, is not an easy job: it requires 5 parts! Copying in CP/M that is: LocoScript 3 (only 2 kb free in drive M) would have taken a lot more turns and consequently longer! 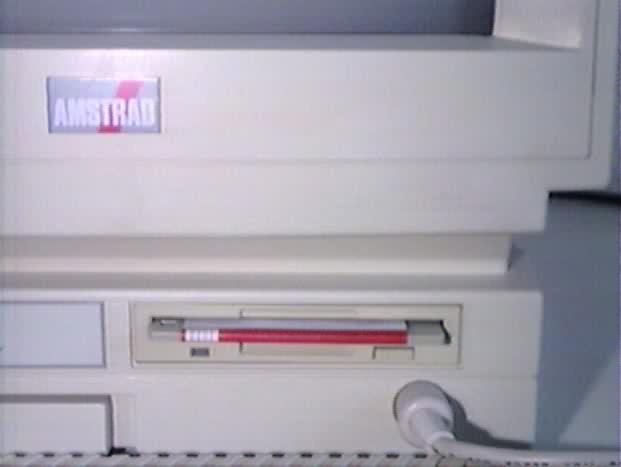 Admitted: that is also because it is equipped with a 706 (supposed to be 720, but in fact 706kb available for data) kilobyte 3.5" disc drive (the 3" drives were not longer available in marketable quantities - Sony had finally beaten Panasonic). The standard format written is still CF2DD, however.

Only the physical size differs: it is a 3.5" disc drive, allowing for easier exchange of data with PC's: several conversion programs were around, although the LocoScript file format still presents the users, that want to retain their layout, with a conversion problem. 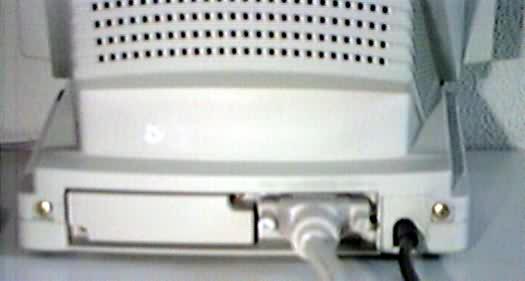 Compatibility is a major problem as users of the PcW 9256 will, no doubt, have found out. The back of the integrated monitor and system case shows only one available port: the cover plate on the left covers an 8000 series expansion port. Fitting an 8000 style add-on will be a difficult task, though, because of the tight space… 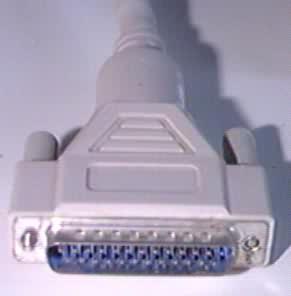 This Joyce is therefore equipped with a 9 dot matrix printer only: a nice feature is that the data cable and the power cord have been incorporated into one cable and its connector is a robust one with that fits with two screws into the case. On the other hand, Amstrad used a IBM female connector in the PcW 9256 (and a male IBM), a standard connector, also used in Centronics parallel cables, that might tempt users to attach a standard PC printer to it. It will not react happily, I guess: the power supply in the cable could short circuit and destroy both the PcW as well as the printer! For the same reason the printer cannot be used with a PC: but neither with an Amstrad PCW 8256/8512! Bad show… 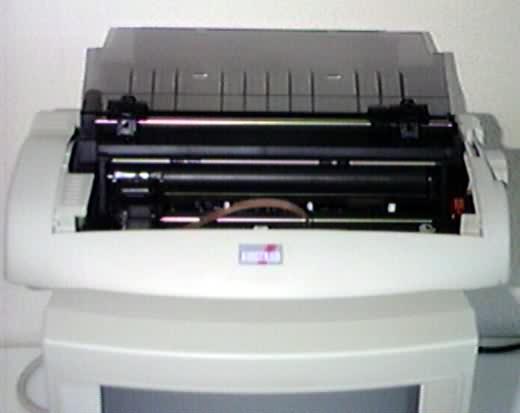 The printer itself is definitely an 8000 series 9-pin dot matrix. It has been fitted in a new house and has a standard that allows it to be placed securely on top of the monitor of the Joyce.

The blue (in an 8000 printer) switch has changed into a red one and the tractor feeder (mounted in the picture) does not have a rounded cover like the 8000's one, but an edged one, but otherwise it is the same old 9-pin printer… Versatile and good for both producing near letter quality as well as producing graphics.

The top part of the screen in this picture also shows what I meant with my comments on the screen: definitely not a flat screen! 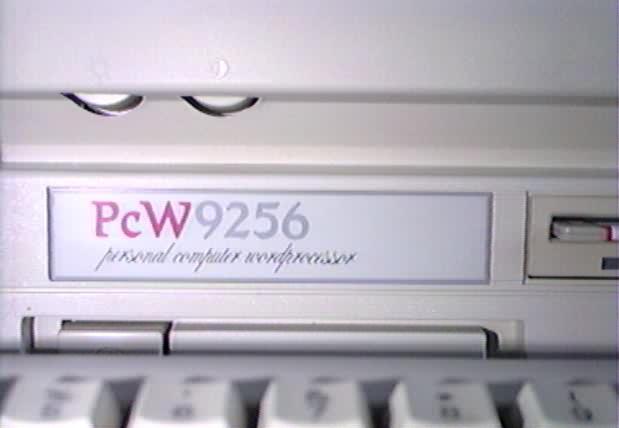 One would have expected the successor of the PCW 9512 and the classmate of the PcW 9512+ to have a standard printer port as well but Amstrad decided against it. The obvious reason that springs into mind is economy (thus explaining the 256kb as well) but I think that there were other reasons as well.

Perhaps the PCW 9512, with its deviating keyboard and daisy wheel printer, showed Amstrad that market segmentation was required. At least I had problems with adopting the XT keyboard of the 9512 and I think lots of others experienced that too. On the other hand, the daisy wheel printer was a big hit, providing letter quality at low cost. 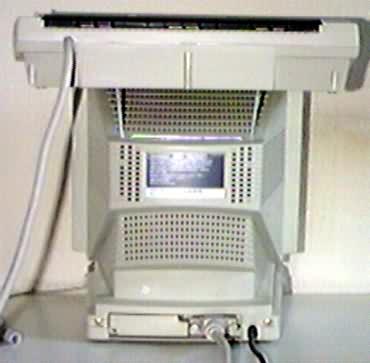 Therefore Amstrad might have been tempted to split up the market into two models: a low budget 9256, versatile with a matrix printer with specifications that resembled the original 8256 and the PcW 9512+ (released in the same year) designed for the dedicated writer. After all it was intended as a dedicated Personal Word Processor anyway, although Schneider marketed it as a general computer system with excellent word processing qualities. As the PcW 9512+ was aimed at a higher market segment for users that did not want to bother with computer techniques it was already provided with 512kb and a standard printer port.

The PcW 9256 was meant for the low budget general computer user. But that is my personal option only!

A facts is that the PcW 9256 is a bit underpowered in its basic configuration, with only 256kb. And there is the potential danger that the IBM/Centronics port lures computer users into thinking that it is a standard printer port! The PcW 10, last in the Joyce series, addressed these problems… 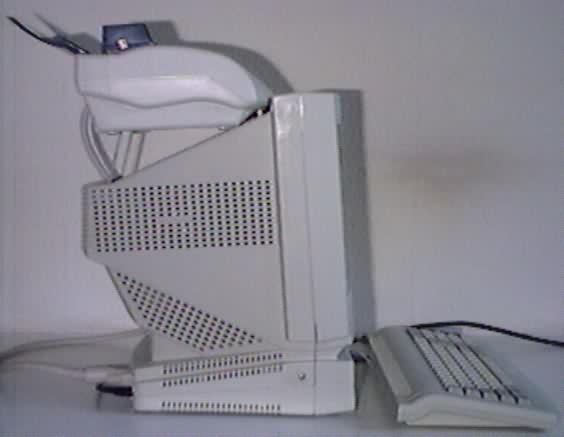 But the PcW (the small 'c' in the name indicates that the boot file is of EMT extension rather than the EMS as used in the 8256/8512 and 9512) remains an elegant, lightweight "back-packer". The photograph on the right should evidence that.

It also shows you that you should not place your monitor(s) too close to the wallpaper (the stain on the right of the monitor)… I will have to redecorate in the autumn!